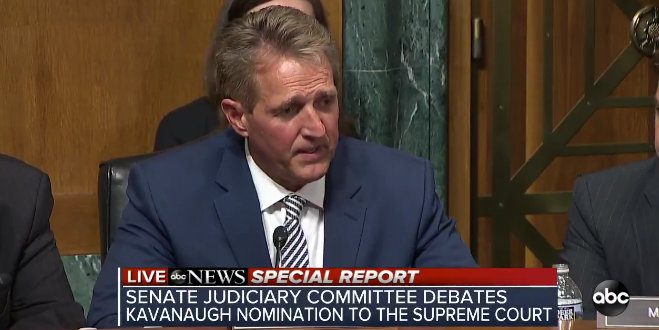 The Senate Judiciary Committee has voted 11-10 along party lines to advance Brett Kavanaugh’s confirmation to the full Senate. GOP Sen. Jeff Flake is calling for a week’s delay before the full Senate votes pending an FBI investigation.

The Senate Judiciary Committee voted along party lines Friday to move Brett Kavanaugh’s Supreme Court nomination to the Senate floor but left open the possibility of an FBI investigation into sexual assault accusations against him. Sen. Jeff Flake, R-Ariz., who had been undecided, agreed to advance Kavanaugh’s nomination but indicated he might oppose him if the White House doesn’t agree to seek such a probe, which Democrats have demanded.

“Our system of justice affords a presumption of innocence to the accused, absent corroborating evidence,” Flake said in a prepared statement. But after negotiating privately with Democrats, he announced the unprecedented effort to seek the FBI’s involvement between the committee and Senate floor votes. Only the White House can force the FBI to undertake such a probe. But if Flake and other Republicans demand it, President Donald Trump may have no choice.