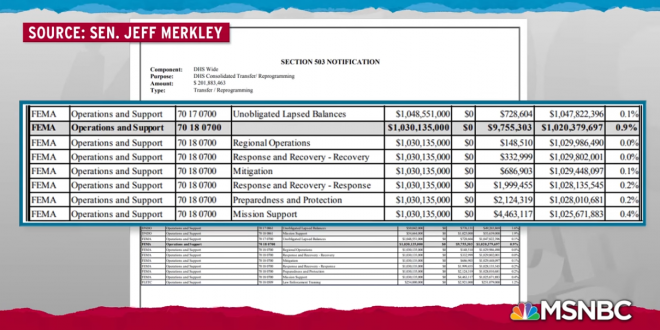 The Department of Homeland Security transferred nearly $10 million from the Federal Emergency Management Agency to Immigration and Customs Enforcement, according to a budget document released by a Democratic senator late Wednesday night, diverting funds from the relief agency just as a major hurricane barrels toward the East Coast.

The document, which was released by the office of Senator Jeff Merkley, of Oregon, shows that the money would come from FEMA’s operations and support budget and was transferred into accounts at ICE to pay for detention and removal operations.

The document also shows that the Department of Homeland Security transferred money from accounts at Customs and Border Protection that pays for border fencing and technology.

Merkley spoke to MSNBC’s Rachel Maddow Tuesday night about how he obtained the documents. “It means that just as hurricane season is starting…the administration is working hard to find funds for additional detention camps, and of course this is all part of the child separation policy, and that’s how this information came into my hands because of my work on the issue of trying to stop the child separations,” he said.

The documents came to light as Hurricane Florence, called “the storm of a lifetime,” emptied homes and hospitals in the Carolinas. More than five million people are now under hurricane warnings with the Category 4 storm expected to make landfall on Friday or Saturday.

Under no circumstances was any disaster relief funding transferred from @fema to immigration enforcement efforts. This is a sorry attempt to push a false agenda at a time when the administration is focused on assisting millions on the East Coast facing a catastrophic disaster.

The money in question — transferred to ICE from FEMA’s routine operating expenses — could not have been used for hurricane response due to appropriation limitations. DHS/FEMA stand fiscally and operationally ready to support current and future response and recovery needs.

Joining @CNN @NewDay shortly to talk about this latest outrageous action of the Trump admin — taking funds away from @FEMA during hurricane season to pay for immigration detention. https://t.co/guhKt4hFHh

BREAKING: Trump took money meant for hurricane relief, and gave it to ICE to deport and detain more immigrants. The Trump admin transferred $9.8M from FEMA to ICE. @Maddow got a statement from DHS denying it was from recovery funds. Then Maddow got docs proving DHS was lying.