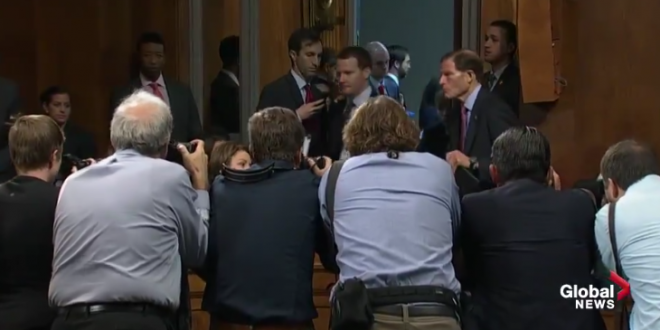 Four Democratic members of the Senate Judiciary Committee walked out of the hearing room in protest after Republicans decided along party lines to schedule a “time certain” vote on Supreme Court nominee Brett Kavanaugh for 1:30 p.m.

Sens. Sheldon Whitehouse (D-R.I.), Richard Blumenthal (D-Conn.), Mazie Hirono (D-Hawaii) and Kamala Harris (D-Calif.) walked out of the room, causing a burst of activity from photographers in the well of the hearing room who captured the moment.

“I strongly object. This is just totally ridiculous. What a railroad job. My answer is no, no, no!” Hirono yelled out shortly before leaving the room.

Moments ago I walked out of the Senate Judiciary Committee hearing on Kavanaugh. This hearing is a sham and Dr. Ford and the American people deserve better.

Democrats. Walk out on this bullshit.

I’ve been saying this for weeks: EVERY DEMOCRAT SHOULD WALK OUT.

Do not legitimize this sham process.

Do not participate in the destruction of the #SupremeCourt.

Empty seats after some Judiciary Democrats walk out pic.twitter.com/yZbzBGdkfr