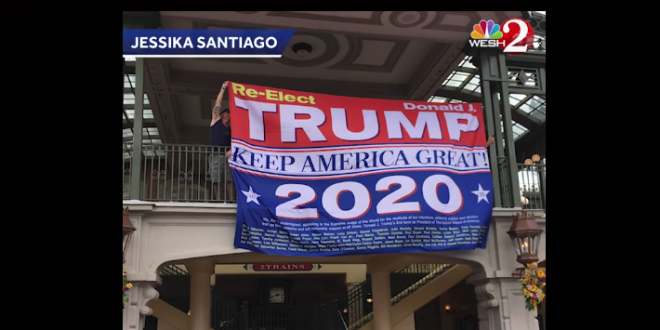 A man visiting Walt Disney World on Sunday hung a banner at Magic Kingdom touting the re-election of President Donald Trump. The man claiming to be behind the banner was Dion Cini, a longtime Trump supporter from New York. Cini told Newsweek on Monday that he wanted a “viral effect” in showing his support for the 45th president of the United States by hanging the banner. “There were security guards watching me,” he wrote to Newsweek. “If they wanted me, they could have grabbed me. Now, if they do come after me or ban me, it will be for political reasons, not policy.”

Reaction from parkgoers appeared to be mixed. Video captured some people cheering and others booing as they walked by the sign.  “This is the Happiest Place on Earth, get that crap out of here,” one parkgoer could be heard yelling.  Disney has not commented on the banner. On Disney’s website, under park rules, it says prohibited activities at Disney theme parks include, “Unauthorized events, demonstrations or speeches, or the usage of any flag, banner or sign for commercial purposes, or to incite a crowd.”

The man’s own video is the first one below.

Previous Kavanaugh: I Won’t Be Intimidated Into Withdrawing
Next McConnell Rages About “Smear Campaign” [VIDEO]