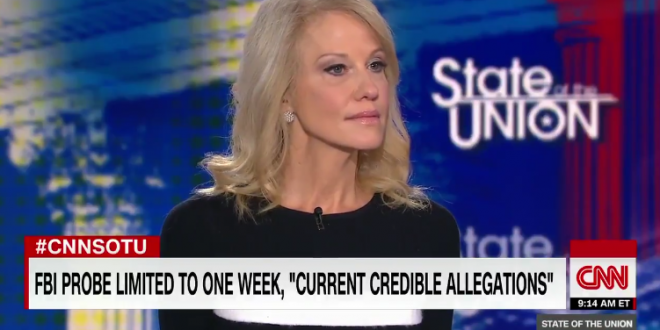 “I don’t expect Judge Kavanaugh or Jake Tapper or Jeff Flake or anybody to be held responsible for that. You have to be responsible for your own conduct,” she continued. Tapper circled back to Conway’s remark, offering her his sympathies. Conway offered no details, and Tapper didn’t ask for any.

After disclosing that she personally is a victim of sexual assault, @KellyannePolls defends Kavanaugh by asserting he’s “not Bill Cosby” and “not even Bill Clinton.” pic.twitter.com/0EQvQ6fRiA

Why continue working for this monster?

Kellyanne Conway on CNN says people ask her how she talks to her daughters about all this, and her feeling is: “How do I talk to my almost 14-year-old son? This is Judge Kavanaugh now. It could be anybody by next week. Respectfully, it could be any man in any position now.”