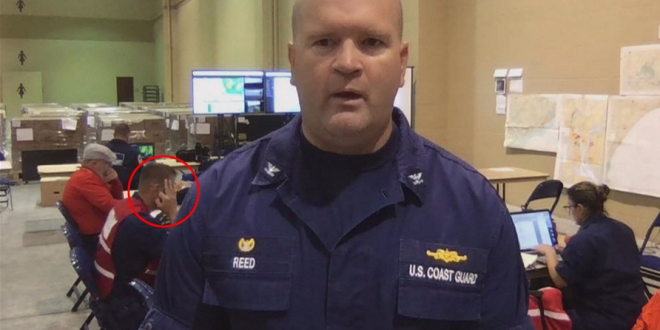 A US Coast Guard member was yanked from his duties on the Hurricane Florence response team after making an “offensive” hand symbol during a MSNBC live TV segment, officials said.

The unidentified worker was sitting behind Sector Charleston Commanding Officer Capt. John Reed during the interview Friday, when he briefly looked at the camera and made the “OK” hand gesture behind his ear — seen by some as a symbol of “white power.”

The man seemed to try and camouflage the gesture by scratching his face during the Live with Ali Velshi interview, but it didn’t escape the eagle eyes of outraged social media users.

This comes a little more than a week after Republican operative Zina Bash ignited a Twitter controversy when some viewers thought she flashed the symbol during Brett Kavanaugh’s confirmation hearing. Some considered it a brazen public promotion of white supremacy during a high-profile government preceding, a theory that went viral in the days after the hearing.

The idea that the hand sign is a secret symbol for white power owes its mainstream spread to a viral troll campaign aimed at making liberals and the media look gullible. In February 2017, 4chan’s /pol/ board discussed ongoing tactics to try to get the idea to go viral. “To any who haven’t seen the original thread, our goal is to convince people on twitter that the ‘ok’ hand sign has been co-opted by neo-nazis,” the original poster of the thread wrote.

As I’ve previously reported, what was meant to be a troll on the left has become a real-world white power symbol after its adoption by literal Nazis and white supremacists.

We are aware of the offensive video on twitter – the Coast Guard has identified the member and removed him from the response. His actions do not reflect those of the United States Coast Guard.

Well, that was about as subtle as a train wreck, on a boat.

Imagine being so racist that when you get the chance to be on TV, you flash your goofy WP hand sign while doing a desk job you are about to lose

Zina Bash, the lawyer who was sitting behind Judge Brett Kavanaugh at today’s confirmation hearing, has denied using a “white power” symbol. Her husband, U.S. Attorney John Bash, says it was just the “random way she rested her hand” https://t.co/8l4z85Ndra pic.twitter.com/cSxbu41Kio

In the background of a Coast Guard briefing on MSNBC on Friday evening, in a bustling aid center, a Coast Guard member flashed what some TV viewers claimed was a white power sign at the camera. https://t.co/v3mLbPRHBJ