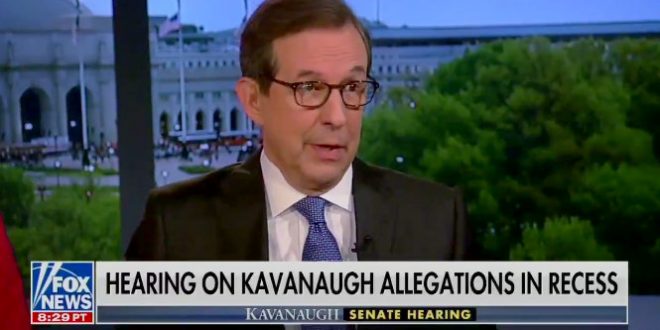 Fox’s Chris Wallace: This Is A Disaster For Republicans

Fox News anchor Chris Wallace said the early part of Christine Blasey Ford’s testimony in front of the Senate was so far a “disaster” for Republicans because Ford came off as a credible witness.

“Extremely emotional, extremely raw, and extremely credible,” Wallace said during a break in the hearing. He added that Ford was “obviously traumatized by an event” and said that “this is a disaster for Republicans.”

Brit Hume, an analyst for Fox, added that Ford came across “very sympathetic” in the first part of her testimony to the Senate Judiciary Committee.

Fox News’ Chris Wallace at the first break in Dr. Christine Blasey Ford’s testimony: Her testimony is “extremely emotional, extremely raw, and extremely credible,” while cross-examination format “is a disaster for the Republicans.” pic.twitter.com/fHy0rcwAV2

Chris Wallace on Fox News calls it a “disaster for the Republicans” says Ford’s testimony is “extremely emotional, extremely raw, and extremely credible” you can’t watch and “have your heart not go out to her”

Previous NRA TV Host: Democrats Are Using Christine Ford As A Pawn Just Like They Do With Victims Of Gun Violence
Next World’s First Flying Car Goes On Sale Next Month