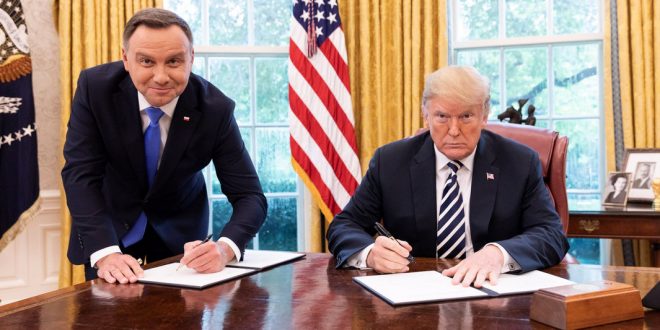 The Polish government did everything it could to turn Tuesday’s visit into one of Trump’s more enjoyable moments. Yet, somehow, Trump managed to offend the Poles so deeply that the fallout was all over Polish news sites on Wednesday morning.

What happened? At the end of their meeting, the two leaders agreed to sign a strategic partnership pact to boost defense, energy, trade and security ties. But what could have been a peaceful moment for both presidents immediately took an awkward turn.

While signing the document, Trump sat comfortably in his chair while the Polish leader was forced to stand next to him and awkwardly reach over the table to sign. Poland’s Duda still somehow managed to smile at the camera, as Trump looked on with a stern face.

Polish radio correspondent Pawel Zuchowski posted on Twitter: “It’s nice of President Trump that he moved a bit, because otherwise our president would have had to sign the document on his knees.”

Polish newspapers went to scholars in diplomacy for their take on the photo. International diplomacy expert Janusz Sibora called it an “offense.”

He stated: “The message is clear: Americans do not respect Poles. If we sign such an important document in that way, we should ask ourselves whether this wasn’t detrimental to the honor of Poland.”

Today, it was my great honor to welcome @prezydentpl Andrzej Duda of Poland to the @WhiteHouse! pic.twitter.com/VdsTYdq9MN

Previous Roger Stone: “I Will Never Roll On Donald Trump”
Next Trump: I Got One Of The Highest Scores Ever Seen On My Physical, I’m Good At Testing, Have Great Stability