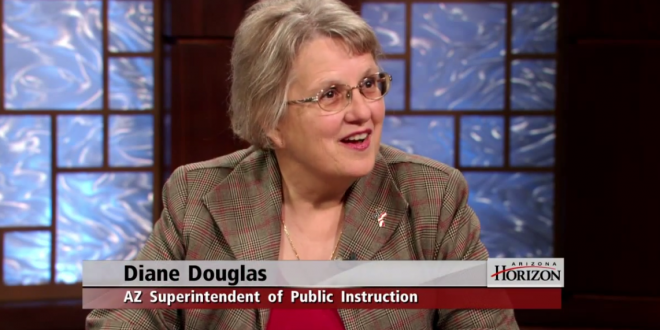 Arizona Superintendent Diane Douglas tapped a young-earth creationist to serve last month on a committee tasked with revising the state’s science curriculum standards on evolution. Joseph Kezele, the president of the Arizona Origin Science Association, is a staunch believer in the idea that enough scientific evidence exists to back up the biblical story of creation.

Kezele teaches biology at Arizona Christian University in Phoenix. He advocates teaching his version of “established, real science” in classrooms. Evolution, he said, is a false explanation for life and should be taught so that students “can defend against it, if they want to.”

The earth is just 6,000 years old and dinosaurs were present on Noah’s Ark. But only the young ones. The adult ones were too big to fit, don’t you know. “Plenty of space on the Ark for dinosaurs – no problem,” Joseph Kezele explained.

Douglas has been working for awhile now to bring a little Sunday school into science class. This spring she took a red pen to the proposed new science standards, striking or qualifying the word “evolution” wherever it occurred. This, after calling for creationism to be taught along with evolution during a candidate forum last November.

Previous Junior Urges GOP Turnout: Trump Supporters Are “Fat, Happy, And Lazy” From Getting Everything They Want
Next Kavanaugh And Accuser To Testify Before Senate Panel