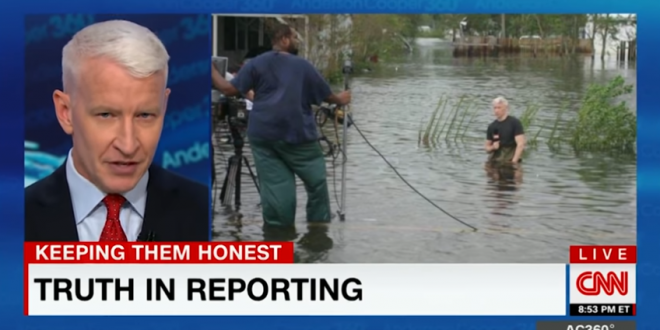 Anderson Cooper spent the last 10 minutes of his show on Monday night responding to a critic: the president’s son. On Sunday, Donald Trump Jr. tweeted out a photo of Cooper standing in waist-deep water during a hurricane, with a caption suggesting that the CNN anchor was lying to make the president look bad. Trump Jr. also seemed to suggest that Cooper’s hurricane coverage had been overly dramatic, and was aimed at improving the network’s ratings.

“I debated whether I should even respond tonight to the president’s son,” Cooper said on Monday’s “AC360.” “I know he considers himself an outdoorsman and pays a lot of money to be led to wildlife in Africa that he then kills. But I’m not sure if he’s actually been to a hurricane or a flood. I didn’t see him down in North Carolina over the last few days helping out, lending a hand, but I’m sure he was doing something important besides just tweeting lies.”

Cooper said that in recent days, conspiracy theorists including President Trump’s son, have shared a photo from his coverage of 2008’s Hurricane Ike and falsely claimed that it shows him exaggerating the depths of floodwaters in Hurricane Florence.

He went on to detail the “behind-the-scenes” of the shot, which shows a CNN cameraman standing ankle-deep in floodwaters, while Cooper stands in deeper waters a few feet away. “The idea that I am kneeling in water to make it look deep is frankly, idiotic,” Cooper said, before playing a clip showing him walking into the deeper water.

Cooper ended the segment by pointing out that the person filming Cooper in the photo, longtime CNN audio tech Doug Thomas, died in September 2017, further proving that the footage was not taken during Florence.

It’s a shame that CNN’s ratings are down 41%. What’s worse is there’s a simple solution that they refuse to accept. Stop Lying to try to make @realDonaldTrump look bad. https://t.co/O3XyWchsJh pic.twitter.com/BCUCxKnOvO

“The idea I am kneeling in water to make it look deep is idiotic.” @AndersonCooper debunks the lies being spread by Donald Trump Jr., and others who falsely claimed he and his team exaggerated the severity of Hurricane Florence. #KeepingThemHonest https://t.co/j2HptrYpe0 pic.twitter.com/zwfvIXCsIY