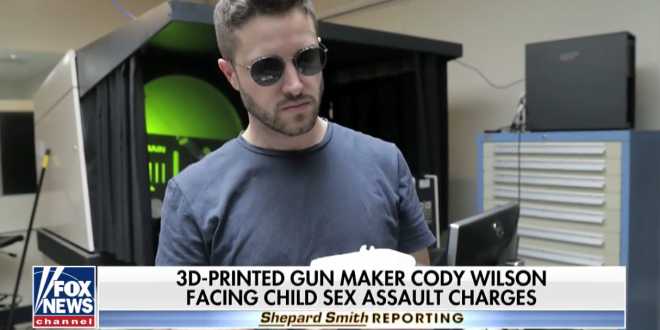 Cody Wilson, the owner of a controversial Austin business that distributes blueprints for untraceable 3-D printed guns, fled to Taiwan after he was tipped off about a police investigation into sexual relations between him and a 16-year-old girl, police said.

He faces a charge of sexual assault of a child in Austin. “Before he left, he was informed by a friend of the victim that she had spoken to police, and police were investigating him for having sex with a minor,” said Austin Police Commander Troy Officer.

Officer said it was unclear when Wilson left for Taiwan, or why exactly he went there, but he didn’t board a return flight to the United States. Austin police are now working with international law enforcement agencies to extradite Wilson back to Travis County for prosecution.

Previous Trump Told Spain To Build A Wall Across The Sahara: That Border Can’t Be Bigger Than Ours With Mexico
Next NEW BOOK: Trump Told CIA Official That “We Should Make (Drone) Bombs Silent So They Can’t Get Away”