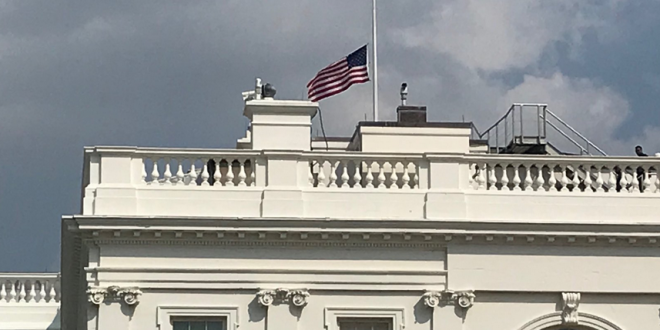 Late Monday afternoon, the White House lowered the flag flying at the White House to half staff. It had had been lowered to half staff Sunday and raised to full staff again on Monday morning, even as the nation continued honoring the life and legacy of Sen. John McCain. The Arizona Republican, whose relationship with President Trump has long been fraught, died on Saturday at the age of 81 after battling brain cancer. During events open to cameras Monday, president did not answer shouted questions about his response to McCain’s death.

We agree with the @AmericanLegion, but feel a deep sense of sadness that they even had to write this letter, to Trump. https://t.co/azq7FqrREP

Sen. #McCain was a war hero & served in Congress. Yet, the President who tells us how to respect the flag is incapable of honoring a dead veteran with a half-staff flag at the @WhiteHouse. If I worked there I’d resign. And @realDonaldTrump, spare us future lectures on the flag.