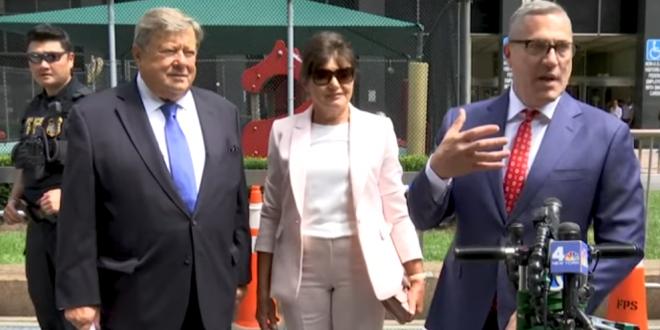 First lady Melania Trump’s parents were sworn in as U.S. citizens in New York City on Thursday. Viktor and Amalija Knavs have been living in the United States on as permanent residents on green cards.

They arrived and departed from a Manhattan federal building escorted by Homeland Security police. They got no special treatment during the process, their attorney said. “The application, the process, the interview was no different from anyone else’s other than the security arrangements,” their attorney Michael Wildes said on Thursday.

“They would appreciate their privacy and we just thank everybody for their attention for this very important dialogue we’re having on immigration. This is an example of it going right,”  he said.

I guess when it’s Melania’s Family, it’s “family reunification” and should be applauded.
Everybody else, it’s “chain migration” and must be stopped.🤷🏻‍♀️ https://t.co/qJruv9oiOn

Just like Trump using H-2B visa workers for Mar-a-Lago and Eric’s vineyard, the rules only apply to others:
“after likely obtaining permanent residence through the very “chain migration” processes the Trump administration has tried to curtail.” https://t.co/rucPdOXm0R