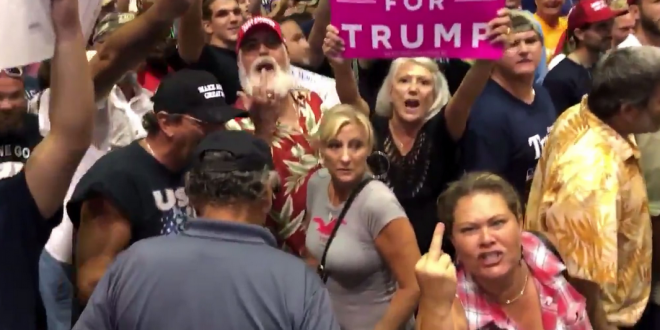 President Trump on Tuesday night used his Twitter account to promote a video of his supporters at a Florida campaign rally chanting “CNN sucks!” The action was Trump’s latest display of animus toward the network, which he has repeatedly called “fake news” and refused to field questions from its reporters at news conferences.

Eric Trump, one of the president’s sons, tweeted the video with the description, “WATCH: Supporters of President Trump Chant ‘CNN Sucks’ During Jim Acosta’s Live Spot at Florida Rally.” The president then retweeted his son’s post.

Just a sample of the sad scene we faced at the Trump rally in Tampa. I’m very worried that the hostility whipped up by Trump and some in conservative media will result in somebody getting hurt. We should not treat our fellow Americans this way. The press is not the enemy. pic.twitter.com/IhSRw5Ui3R

I enjoy the maga guy booing, but also covering his face with his maga hat because he is also ashamed of himself. That’s interesting. https://t.co/mexScaiUFP

The President of The United States just RTed this mob scene as a positive. A boon. A sign of a great America. pic.twitter.com/fTx7OSRU7w