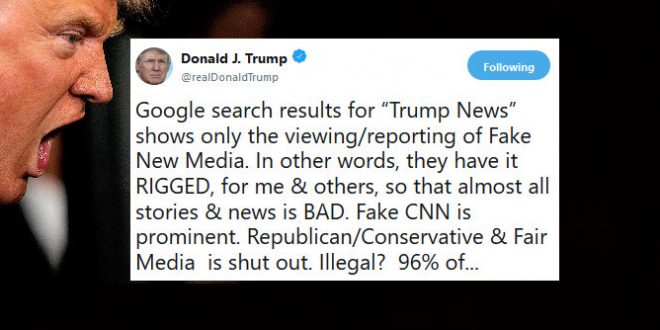 The perceived leftwing bias of big tech companies has become a major talking point for conservatives. And this morning on Twitter, President Trump escalated their claims.

Trump suggested that not only was there a tendency for tech companies to suppress right-wing voices, but that Google has “rigged” its search results to only show negative reporting about him. The president added that Google and others were “hiding information and news that is good,” and said that this was “very serious situation” that “will be addressed.”

Trump included in his tweets a dubious statistic: that 96 percent of search results for the term “Trump News” came from “National Left-Wing Media.”

Trump’s “96%” claim apparently comes from a single article on the far-right PJ Media site which was spread widely in the pro-Trump ecosystem over the weekend thanks to homocon Matt Drudge.

Google search results for “Trump News” shows only the viewing/reporting of Fake New Media. In other words, they have it RIGGED, for me & others, so that almost all stories & news is BAD. Fake CNN is prominent. Republican/Conservative & Fair Media is shut out. Illegal? 96% of…

….results on “Trump News” are from National Left-Wing Media, very dangerous. Google & others are suppressing voices of Conservatives and hiding information and news that is good. They are controlling what we can & cannot see. This is a very serious situation-will be addressed!

Previous CHATTER AWAY: Overnight Open Thread
Next Weird Al: Please Don’t Pickax My New Hollywood Star, Unless I Do Something Monstrous And Evil [VIDEO]