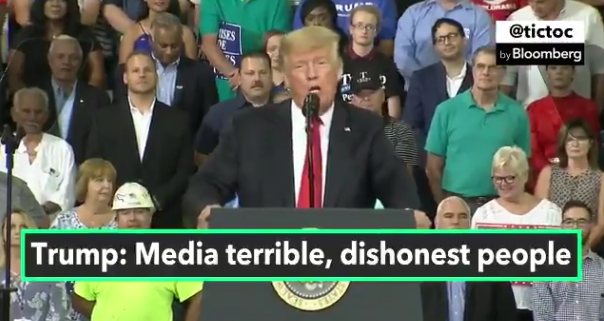 Trump Self-Owns In Rant Against Media: “When You Get Good Ratings, You Can Say Anything” [VIDEO]

President Trump leaned into his attacks against the news media Thursday night at a rally in Indiana, blasting news outlets for what he said was unfair coverage driven by ratings.

After mocking a protester who was escorted out at the beginning of his rally, the president predicted that “terrible” people in the press would report that the venue suffered major problems with protesters.

“These are just dishonest, terrible people,” Trump continued, referring to assembled reporters in the back of the room. “Terrible people. Not all of them. Honestly, not all of them. I’d say 85 percent,” he added. “When you get good ratings, you can say anything,” the president added.

Trump, just now in Indiana: “When you get good ratings, you can say anything.”

President Trump interrupts a long rant against the media to say this: “That just shows where you get good ratings you can say anything.”

“When you get good ratings, you can say anything.” — Donald Trump, saying the quiet part out loud

“We as a country cannot tolerate political censorship!” – @realDonaldTrump

Here’s a shot of a Trump campaign staffer at the same Indiana rally blocking the lens of a camera aimed at a protester being removed.

Trump lashes out at DOJ and FBI in Indiana rally tirade, threatens to takeover investigations, turn fire on Hillary. pic.twitter.com/beNgLWixFo

Announcement ahead of Trump’s rally in Indiana:

“If a protest starts near you, please do not in any way, touch or harm a protester. Please notify law enforcement officers of the location of the protester by holding a rally sign over your head and chanting, “Trump, Trump, Trump.” pic.twitter.com/VtZcHwGPQq

“Our Justice Department and our FBI have to start doing their job and doing it right and doing it now, because people are angry…What’s happening is a disgrace…at some point…I will get involved,” Trump tells a cheering crowd in Evansville, Indiana pic.twitter.com/PBoPfsF8KU

Previous Death Penalty For White Supremacist Killer Of Florida Gay Couple: “Homosexuals Are A Disease To Mankind”
Next CALIFORNIA: Governor Gets Bill Allowing Some Cities To Decide If Bars Can Stay Open Until 4AM [VIDEO]