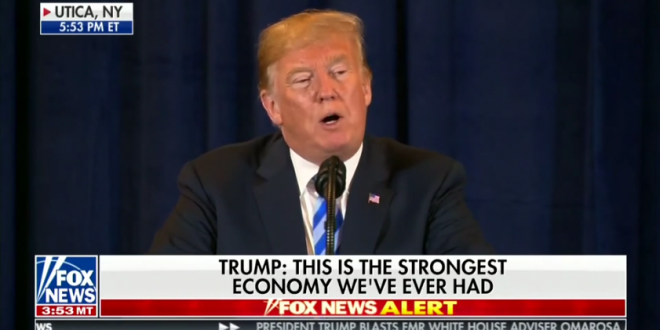 “He did say that. Maybe he meant it. The one thing we know, they do say, anybody that runs against Trump suffers.” – Glorious Leader, inventing a phone call from Andrew Cuomo during an upstate New York speech at a fundraiser for nutjob GOP Rep. Claudia Tenney, who last appeared on JMG when she claimed that “most mass shooters are Democrats.”

Meet Rebecca and Howard. They drove to Utica from Syracuse last night (they live in Eastwood). They’re big Trump supporters and said they hate Andrew Cuomo. “New York has gotten so crazy” Howard said. He spends all day listening to Limbaugh, Hannity and Michael Savage, he said. pic.twitter.com/ir1vRgra4X

The one thing we know, they do say anybody that runs against trump suffers.” pic.twitter.com/IrPJ87IRbv

IF YOU CAN BELIEVE IT: @RepTenney now claiming “sticker shock” on fundraiser where SHE approved the price?! Why should people in our area have to pay even a dime to see their President. Claudia Tenney is beyond out of touch. https://t.co/M3MdYWvXdW @NewsRadio1290