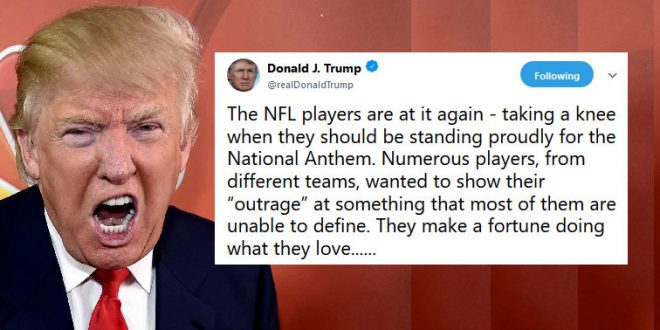 We all knew Glorious Leader could not resist:

President Donald Trump weighed in on NFL anthem protests as a number of players knelt, raised their fists or stayed in the dressing room during the national anthem as the league’s pre-season gets underway. Trump’s claim that players are “unable to define” what they are protesting is a solid demonstration of his complete disinterest in finding out anything about the protests. The president could look at the Twitter feed of Philadelphia Eagles safety Malcolm Jenkins.

The NFL players are at it again – taking a knee when they should be standing proudly for the National Anthem. Numerous players, from different teams, wanted to show their “outrage” at something that most of them are unable to define. They make a fortune doing what they love……

…..Be happy, be cool! A football game, that fans are paying soooo much money to watch and enjoy, is no place to protest. Most of that money goes to the players anyway. Find another way to protest. Stand proudly for your National Anthem or be Suspended Without Pay!

Before we enjoy this game lets take some time to ponder that more than 60% of the prison population are people of color. The NFL is made up of 70% African Americans. What you witness on the field does not represent the reality of everyday
America. We are the anomalies… pic.twitter.com/gCeNKuTl1d