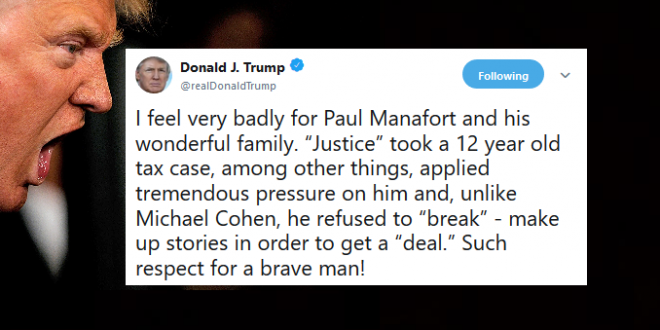 Trump Lavishes Praise On “Brave” Manafort, Claims Cohen Pleaded Guilty To Things “That Are Not A Crime”

The president has consistently defended Manafort both in person and on Twitter. He added to his online flattery of the convicted felon Wednesday morning, declaring that he feels “very badly” for Manafort and lauding Manafort for not taking a plea deal, unlike someone else he knows.

I feel very badly for Paul Manafort and his wonderful family. “Justice” took a 12 year old tax case, among other things, applied tremendous pressure on him and, unlike Michael Cohen, he refused to “break” – make up stories in order to get a “deal.” Such respect for a brave man!

A large number of counts, ten, could not even be decided in the Paul Manafort case. Witch Hunt!