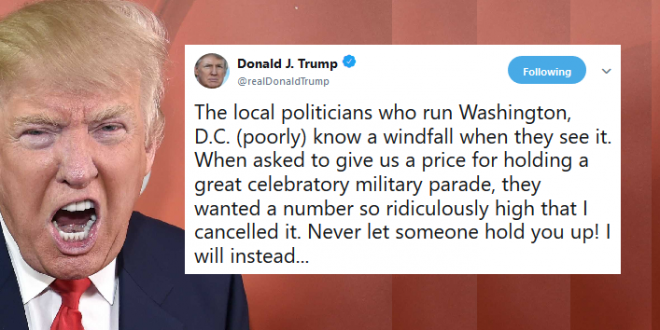 President Trump on Friday blamed local officials for his decision to postpone a grand military parade in Washington this fall, alleging without evidence that they had unreasonably inflated the price.

Trump said it was possible the parade could be staged next year if the cost “comes WAY DOWN” and added that with the savings “we can buy some more jet fighters!” His tweets, which did not elaborate on his allegations about the city government, came a day after the Pentagon said the parade might be postponed amid questions about the event’s increasing costs.

About an hour after the president’s tweet, D.C. Mayor Muriel E. Bowser (D) delivered her own caustic response on Twitter, indicating the desired parade would have cost $21.6 million to organize in the nation’s capital. The federal government typically reimburses the District for a large share of the security and logistical costs for such events.

The local politicians who run Washington, D.C. (poorly) know a windfall when they see it. When asked to give us a price for holding a great celebratory military parade, they wanted a number so ridiculously high that I cancelled it. Never let someone hold you up! I will instead…

….attend the big parade already scheduled at Andrews Air Force Base on a different date, & go to the Paris parade, celebrating the end of the War, on November 11th. Maybe we will do something next year in D.C. when the cost comes WAY DOWN. Now we can buy some more jet fighters!

Yup, I’m Muriel Bowser, mayor of Washington DC, the local politician who finally got thru to the reality star in the White House with the realities ($21.6M) of parades/events/demonstrations in Trump America (sad). https://t.co/vqC3d8FLqx