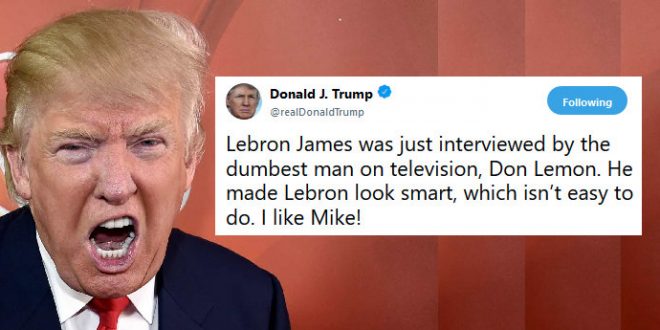 President Trump targeted LeBron James on Friday night in a tweet that takes a swipe at the NBA player and calls CNN host Don Lemon “the dumbest man on television.”

In the CNN interview, James criticized Trump for using sports to “kind of trying to divide us.” CNN noted that although the interview originally aired Monday, it had re-aired Friday night shortly before Trump’s tweet.

It’s not the first time that Trump has individually targeted a sports player for a personal attack. He has criticized NFL players who kneel during the anthem, and has frequently called out basketball players for being ungrateful or discourteous.

Lebron James was just interviewed by the dumbest man on television, Don Lemon. He made Lebron look smart, which isn’t easy to do. I like Mike!

LeBron is a smart dude (and one of the most thoughtful athletes we have) – this is a bullshit tweet and feels more than a little racist. You’re a constant embarrassment. https://t.co/QxYpuyHsuW

You. Seriously. Just. Made. Me. Nauseous.
Lebron has had one wife, zero scandals, and just opened a school he built for inner city kids.
I’ll take dumb over whatever this tweet defines you as any day. 🤢

So Trump finally went at LeBron, huh? Shocked it took this long. Not shocked it happened during a week where LeBron literally opened a school for at-risk kids.

Congratulations to @KingJames on winning Athlete of the Year in last night’s @ESPYS. LeBron is also a great guy!

Previous CHATTER AWAY: Overnight Open Thread
Next Steve Schmidt: 35% Of The Country Are Trump Cultists