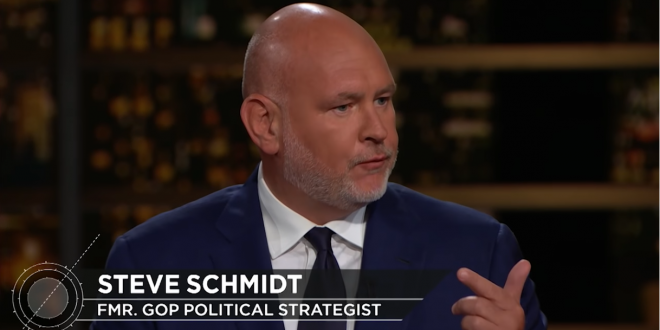 Steve Schmidt: 35% Of The Country Are Trump Cultists

“We’re seeing somebody go to mass rallies, constantly lie to incite fervor in a cult of personality base, we are seeing him make victimization honorable – they’re all victims, right? We are seeing the allegation of conspiracy, the ‘Deep State,’ hidden, nefarious movements that only the leader can see. We see the scapegoating of minority populations, vulnerable populations, and lastly, the assertion that ‘I need to exercise these powers that no president has ever claimed to have.'”

“This is deliberate. This is an assault on objective truth. And once you get people to surrender their sovereignty, what is true is what the leader says is true, what is true is what the leader believes is true, even though what’s true is staring you in the face. when that happens, you are no longer living in a democratic republic. 35% of this country has checked out. They have joined a cult.They are obedient. They are obedient to the leader.” – Steve Schmidt, speaking last night on Bill Maher’s HBO show.

Steve Schmidt blasts Trump supporters:
“35% of this country has checked out. They have joined a cult. They are obedient to the leader.” pic.twitter.com/ffM12kJUoV