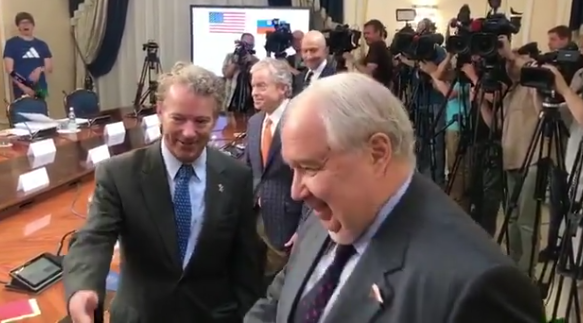 Sen. Rand Paul, one of President Trump’s more eager defenders on Russia, jetted into Moscow on Monday in a bid to increase engagement with the country. Paul (R-Ky.) met with several Russian senators including Sergey Kislyak, Russia’s former envoy to Washington and a key player at the heart of the election meddling scandal that continues to rock relations between the United States and Russia.

In a meeting at Russia’s upper house of parliament, Paul also invited Russian lawmakers to meet with U.S. Congress members, in Washington or elsewhere, Interfax news agency reported him as saying. “I think this is in­cred­ibly important,” Paul said after the high-profile sit-down. Monday’s whirlwind visit to Moscow, however, was not part of official diplomacy. “Sen. Rand Paul is visiting Russia as part of a private group,” said a spokesman from the U.S. Embassy in Moscow.

When asked by CNN whether the issue of Russian interference came up, Paul said he had “general discussions about a lot of issues.” Senior Russian lawmaker Konstantin Kosachev, who was also in the room, reiterated the Russian position that “there was no interference in 2016,” adding “there of course will not be any interference in the elections this year.”

“Trump’s hands are tied behind his back, he can’t advocate for greater cooperation between our countries. Because all this will look like: “Oh, you love Russia!” Sen. Rand Paul (R-KY) said speaking in Moscow at a meeting with Russian lawmakers according to Russian state media.

Sen. Rand Paul is in Moscow meeting with Sergey Kislyak, who played a big role in helping Putin interfere in our election. Paul and any other Republican who supports/visits Russia should just stay there. https://t.co/j5dJ3aYFee

In Moscow, US Senator Rand Paul calls for “more engagement” with Russia. Here’s him arriving for talks with Russian senators. pic.twitter.com/JrAQM9z6p3

.@RandPaul is one of only 2 senators that voted against the bipartisan Russian sanctions bill that passed 98-2
*AND*
He’s traveling to Moscow to meet with Russians on Monday
*AND*
Russia is still hacking us
*AND*
This seems juuuuuuust a little bit fishy 🐟 🐠 🐠 🐡 🐟 🐠 🐡

#Russia‘s state TV shows Rand Paul in Moscow, chatting about the weather with infamous Sergey Kislyak (known to U.S. officials as a top spy and recruiter of spies). pic.twitter.com/t98RFB7uUO