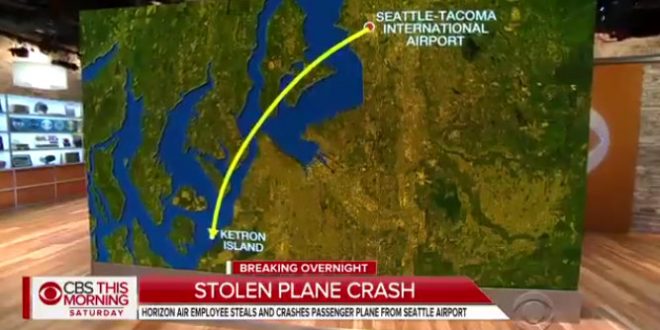 An airline worker stole an empty Alaska Airlines plane from Seattle-Tacoma International Airport in Washington on Friday night, and the National Guard scrambled two fighter jets to chase the aircraft, which crashed on a sparsely populated island in Puget Sound, officials said.

No passengers were aboard the 76-seat Horizon Air Q400 turboprop plane, which was stolen by a 29-year-old Horizon Air ground service agent from Pierce County, according to airline and law enforcement officials. Horizon Air is a subsidiary company that operates Alaska Airlines aircraft.

“A joyride gone terribly wrong,” Pierce County Sheriff Paul Pastor said during a news conference in Steilacoom, which is about 3 miles from the island. No injuries were reported on the ground, Pastor said, as the plane crashed and started an intense fire on the wooded, 230-acre island, which has a population of 20. He said it appeared the man who took the plane died.

Horizon Air COO Constance von Muehlen said in a late-night video that “our hearts are with the family of the individual onboard as well as all our Alaska Air and Horizon Air employees.”

Some dude stole a plane from #Seatac (Allegedly), did a loop-the-loop, ALMOST crashed into #ChambersBay, then crossed in front of our party, chased by fighter jets and subsequently crashed. Weird times. pic.twitter.com/Ra4LcIhwfU

Previous CHATTER AWAY: Overnight Open Thread
Next Avenatti On His Potential 2020 Run Against Trump: When They Go Low, I Say We Hit Back Harder [VIDEO]