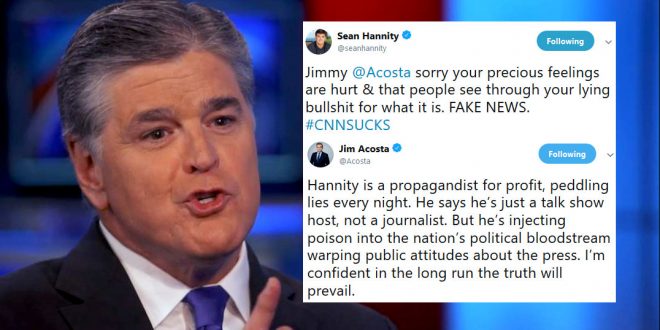 Fox News’ Sean Hannity fired back tonight after CNN’s Jim Acosta called him out on Twitter. Last night and tonight, Hannity criticized CNN’s chief White House correspondent and said he was heckled by Trump rallygoers because he’s part of the “abusively biased” media, adding tonight that he should have been more outraged by harassment of conservatives like Sarah Sanders. After Hannity’s coverage tonight, Acosta took to Twitter to slam the Fox News host.

Hannity is a propagandist for profit, peddling lies every night. He says he’s just a talk show host, not a journalist. But he’s injecting poison into the nation’s political bloodstream warping public attitudes about the press. I’m confident in the long run the truth will prevail.

Jimmy @Acosta sorry your precious feelings are hurt & that people see through your lying bullshit for what it is. FAKE NEWS. #CNNSUCKS