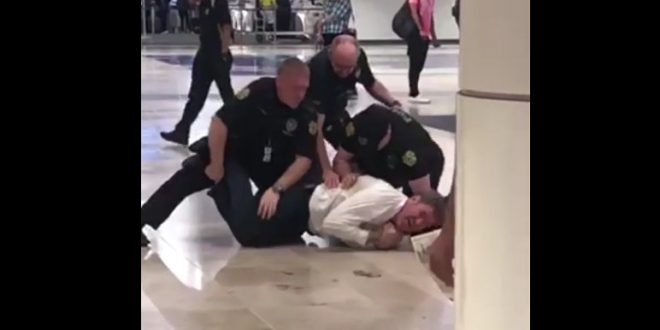 An unruly passenger was arrested Thursday morning at Orlando International Airport and the incident was caught on camera. Jeffrey Epstein is charged with battery on a law enforcement officer, resisting arrest, trespassing after a warning and disorderly conduct, according to an arrest affidavit from the Orlando Police Department.

Police said that Epstein began to yell when he saw the officers arrive. After talking with police, Epstein began to calm down, but became agitated when he learned the airline was not going to allow him to fly because of his behavior. “If you’re going to do this to a white doctor, who’s 59-years-old, for doing nothing, then why would black people trust you?,” Epstein said.

While speaking with WESH 2 News outside of the jail, Epstein began speaking about his political views. “I’m a conservative Republican, I’m a Trump guy. But until the police fix this problem, I don’t blame black people for being upset when they get arrested.”

“They are treating me like a (expletive) black person.” Doctor arrested at OIA tells us why he did it: https://t.co/747uG93w0s pic.twitter.com/BygGbJQcy7

NEW: Lakeland doctor Jeffrey Epstein arrested at @MCO for resisting @OrlandoPolice officers who said he was yelling and had to leave. In video, the dr says they’re “treating me like an (expletive) black person”. Epstein tells me he was making point about police use of force #WESH pic.twitter.com/1ZTN0lRT0B

More from doctor arrested at @MCO for resisting arrest:
“I’m a conservative Republican, I’m a #Trump guy. But until the police fix this problem, I don’t blame black people for being upset when they get arrested.”

Previous Omarosa’s Publisher Fires Back At Trump’s Legal Threat: If You Sue Us, You’ll Be Ever So Sorry During Discovery
Next Pentagon Cancels Military Parade After Cost Leak