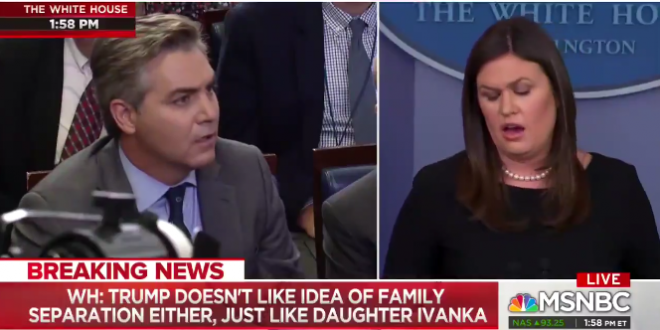 CNN’s Jim Acosta: “You read off a laundry list of your concerns about the press and then things that you feel were misreported but you did not say that the press is not the enemy of the people. I think it would be a good thing if you were to state right here at this briefing that the press, the people who are gathered in this room right now, doing their jobs every day, asking questions of officials like the ones you brought forward earlier are not the enemy of the people. I think we deserve that.”

Sarah Sanders: It’s ironic, Jim, that not only you and the media attack the president for his rhetoric when they frequently lowered the level of conversation in this country. The media has attacked me repeatedly. When I was hosted by the correspondence association you brought up a comedian to attack me. As far as I know I’m the first press secretary in the history of the United States that’s required Secret Service protection. The media continues to ratchet up the verbal assault against the president and everyone in this administration and certainly we have a role to play but the media has to role to play for the discourse in this country as well.

Jim Acosta: “You did not say in the course of those remarks that you just made that the press is not the enemy of the people. Are we to take it from what you just said, we all get put through the wringer, we all get put through the meat grinder in this town and you’re not an exception and I’m sorry that happened to you. I wish that did not happen. For the sake of this room, for the people in this room, this democracy, this country, all the people around the world are watching what you are saying and the White House for the United States of America, the president of the United States should not refer to us as enemy of the people? His own daughter acknowledges that and all I’m asking is you acknowledge that right here and right now.”

Sarah Sanders: “I appreciate your passion. I share it. I’ve addressed this question. I’ve addressed my personal feelings. I’m here to speak on behalf of the president. He’s made his statements clear.”

I walked out of the end of that briefing because I am totally saddened by what just happened. Sarah Sanders was repeatedly given a chance to say the press is not the enemy and she wouldn’t do it. Shameful.

An extraordinarily disappointing moment by @PressSec just now… Her inability to acknowledge the role POTUS has played in all of this media bashing only hurts her own credibility…She had a chance to defend the institution and take the high ground and show leadership, instead..

Do not miss or minimize this: the spokesperson for the US President will not utter the words the “press is NOT the enemy of the people”. https://t.co/68ImPqyZLD

Acosta Asks Sanders to Say that Press is **NOT** Enemy of the People. Sanders Responds with Anti-Press Tirade. 1/2 pic.twitter.com/W6Fec8m0MW

Trump supporters at his Tuesday rally harrassed CNN reporter Jim @Acosta. Today, Acosta asked Press Secretary Sarah Huckabee Sanders if she thinks the press is the enemy of the people. She refused to say they’re not. pic.twitter.com/Gq56Lp1ufO