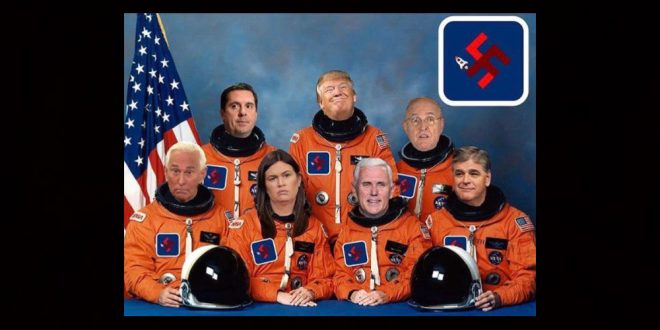 Roger Stone, longtime ally of President Donald Trump, posted a photoshopped picture on Instagram Tuesday showing himself, the president, and other Trumpworld defenders in spacesuits. But the picture shows the mock Space Force team wearing shocking insignias. Swastikas. They’re shown wearing Swastikas. Judging by the imagery and the “in space no one can hear you lie” caption, the picture was most likely made by a Trump critic — but Stone decided to latch onto it at first in order to jab at the “liberal scumbags.”

It appears that Roger Stone has deleted this photo of him and Trump as the “Space Force” wearing uniforms clearly emblazoned with swastikas. https://t.co/uracvyLxfB pic.twitter.com/dzWHoWOKro

Previous School Cancels Classes After Parents Threaten Violence Against Trans Student: “A Sharp Knife Will Do The Trick”
Next BREAKING: Trump Sues Omarosa For Breach Of NDA