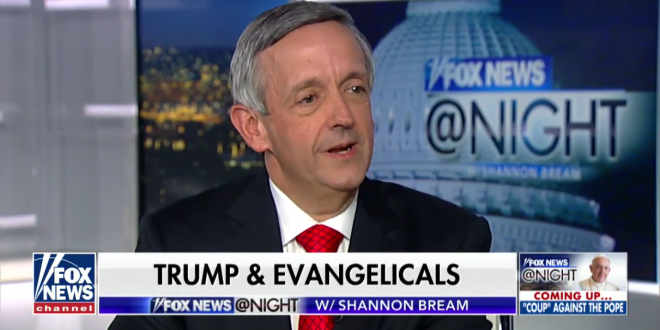 Robert Jeffress: Evangelicals Don’t Care About Trump’s Adultery, The Left’s Shaming Is Not Going To Work

“I know a lot of people are still perplexed- why are Christians so supportive of Donald Trump? Well, it’s really not that hard to figure out when you realize he is the most pro-life, pro-religious liberty, pro-conservative judiciary in history and that includes either Bush or Ronald Reagan. I think that is why evangelicals remain committed to this president and they are not going to turn away from him soon.

“To be fair, Shannon, we have to understand these are still allegations against the president, so I’m not going to judge the president on these things. But even if they were true, some of these allegations, I mean, obviously, we don’t support extramarital affairs, we don’t support hush money payments, but what we do support are these president’s excellent policies. And I think most thinking people can absolutely differentiate between the two.

“And don’t be mistaking what is going on here. Those who hate President Trump, those on the left know that if they can dislodge his evangelical supporters from him, they have a shot at overtaking the White House. So I think the left is trying to shame people like myself continuously for supporting this great president. It’s not going to work. We’re not going to turn away from him.”

Jeffress recently appeared on JMG for declaring that NFL players would be “shot in the head in North Korea” and for his billboard campaign declaring that America is a “Christian nation.” In the past, Jeffress has said that all Jews will go to hell and that Obama and same-sex marriage are “laying the ground for the anti-Christ.”

Here is @IvankaTrump posing at tonight’s evangelical dinner with a man who has quite literally claimed marriage equality is a satanic plot to destroy the image of God. https://t.co/iiJjoshAOy pic.twitter.com/HJepM8hTE1

I have appeared on TV opposite Tony Perkins to defend my one monogamous marriage. And here he is applauding a man who has had publicly acknowledged affairs in all three of his. https://t.co/w1RCM4tEdk

Previous Weird Al: Please Don’t Pickax My New Hollywood Star, Unless I Do Something Monstrous And Evil [VIDEO]
Next Lindsey Graham: If Trump Fires Sessions, Any Nominee Will Have To Promise To Let Mueller Finish [VIDEO]