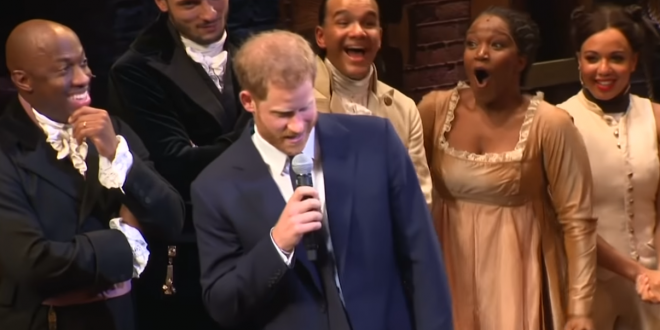 Prince Harry stole the show at London’s West End after bursting into song at the hit US hip-hop musical Hamilton. The Duke of Sussex gave those in the theater something to remember on Wednesday night after breaking into song at the end of a charity performance of the show, treating the cast to a song sung by the George III character in the show — Harry’s sixth-great-grandfather. On stage with the cast, Harry broke into mock-song, starting off with “You say…” before cutting himself amid cheers and laughter from the cast and audience. The show was held to raise money for the Duke’s HIV charity, Sentebale.

Thank you to the cast and crew of @HamiltonWestEnd for a fantastic performance, raising awareness and funds for @Sentebale‘s work with children and young people affected by HIV #HamiltonLDN pic.twitter.com/M5hmjTfhEz

The Duke and Duchess of Sussex with the cast and crew of @HamiltonWestEnd, following tonight’s special gala performance in aid of @Sentebale.

Fnd out more about Sentebale’s work with children and young people affected by HIV: https://t.co/GVrby5bFrO pic.twitter.com/R7O3MbNc43