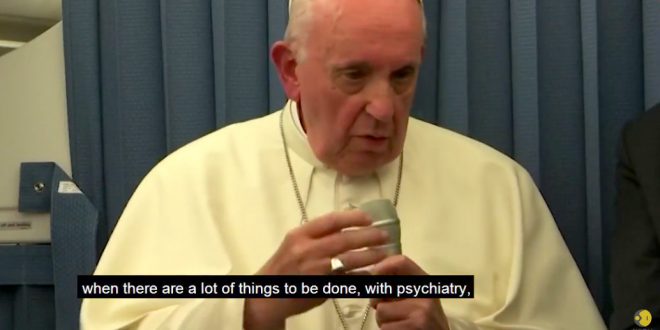 Pope Francis: Parents Shouldn’t Reject Their Gay Kids, But Should Seek Psychiatric Help For Them [VIDEO]

Pope Francis has recommended parents seek psychiatric help for children who show homosexual tendencies, during a press conference on his plane taking him back to Rome from Ireland. A journalist asked the pontiff on Sunday what he would say to parents who observe homosexual traits in their children.

“I would say first of all pray, not to condemn, to dialogue, to understand, to give space to the son or the daughter,” he responded. Parents must also consider the age of their child, he said. “When it shows itself from childhood, there is a lot that can be done through psychiatry, to see how things are. It is something else if it shows itself after 20 years.”

Speaking to reporters after closing out a Catholic family rally in Ireland, Francis said: “There have always been gay people and people with homosexual tendencies.” Francis was asked what he would tell a father of a child who just came out as gay. Francis said he would first suggest prayer.

“Don’t condemn. Dialogue. Understand, give the child space so he or she can express themselves.” He urged parents not to respond with silence. “Ignoring a child with this tendency shows a lack of motherhood and fatherhood.” He said: “This child has the right to a family. And the family not throwing him out.”

Previous Scamvangelist Jim Bakker: I Don’t Dare Wear A Trump Hat, If I Did I Might Be Murdered In The Street [VIDEO]
Next NRA TV Host Blames FL Video Game Shooting Survivor For Wearing Headphones: He Couldn’t Hear The Shots