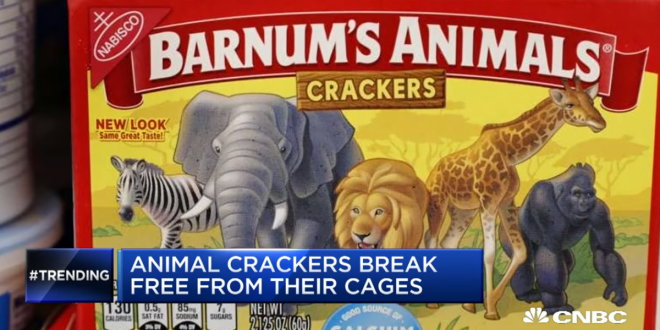 After more than a century behind bars, the beasts on boxes of animal crackers are roaming free. Mondelez International, the parent company of Nabisco, has redesigned the packaging of its Barnum’s Animals crackers in response to pressure from PETA, which has been protesting the use of animals in circuses for more than 30 years.

Mondelez agreed and started working on a redesign. In the meantime, the crackers’ namesake circus — Ringling Brothers and Barnum and Bailey — folded for good.

Instead of showing the animals in cages — implying that they’re traveling in boxcars for the circus — the new boxes feature a zebra, elephant, lion, giraffe and gorilla wandering side-by-side in a grassland. The outline of acacia trees can be seen in the distance.