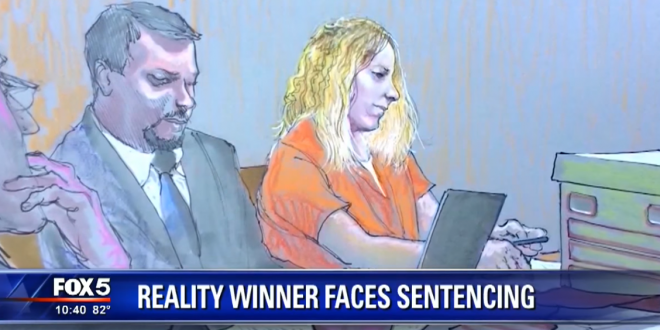 A former government contractor accused of leaking confidential information to the media has been sentenced to more than five years in prison. Reality Winner, 26, was accused of taking a report about a 2016 Russian military intelligence cyberattack from the NSA facility where she worked and sending it to an online news outlet. Winner initially faced 10 years in prison and a $250,000 fine, but accepted a plea deal. A federal judge sentenced her to 63 months in prison with three years of supervised release.

Ms. Winner, 26, received the longest sentence ever imposed for an unauthorized release of government information to the media. She is the first person to be sentenced under the Espionage Act since President Trump took office. She was arrested in June 2017 and was held for more than a year while prosecutors built their case. She pleaded guilty in June 2018 to one felony count of unauthorized transmission of national defense information, for giving a classified report about Russian interference in the 2016 election to a news outlet.

Previous Sears To Shutter Dozens More Stores In November
Next Al Franken: Manafort Won’t Flip Because He Knows If He Talks The Russians Will Surely “Seek Retribution”