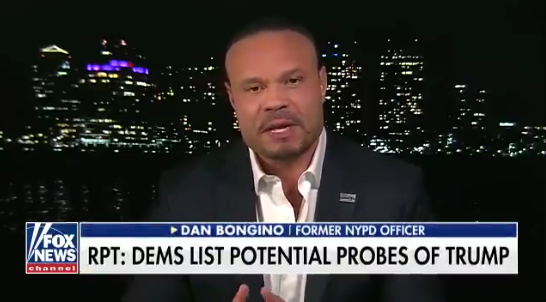 NRA TV Host Flips Out Over GOP “Hell List”: It’s A Road Map To The Full Weaponization Of Government [VIDEO]

NRA TV host Dan Bongino appeared on state television this morning to fearmonger Trump’s cultists about the just-leaked GOP “hell list” mentioned in the post below.

Media Matters has the quote:

“You know what it really is? It is a road map to the full weaponization of government and, frankly, Steve, it’s one of the most frightening things I’ve seen in a very long time. This has been the Democrats’ dream forever. Full weaponization of government by a couple of things, and if you go down that list, you will see exactly how they plan to do this. It’s by using judges to legislate from the bench, effectively usurping power.

“Using the bureaucracy to endlessly target Donald Trump, his family, and Donald Trump’s interests — not because they’re targeting criminality, but because they’re targeting Trump. And, finally, the use of legislative committees if they take over, not to investigate criminality and malfeasance, Steve, but to create it. That’s different. That list is terrifying, and that is the Democrats’ dream, and anyone interested in liberty’s worst nightmare.”

.@dbongino: Dems never got over the fact that Trump won the election – their goal at this point is to represent everything that’s against Trump, but not to stand for anything themselves pic.twitter.com/nLlOQXTog9