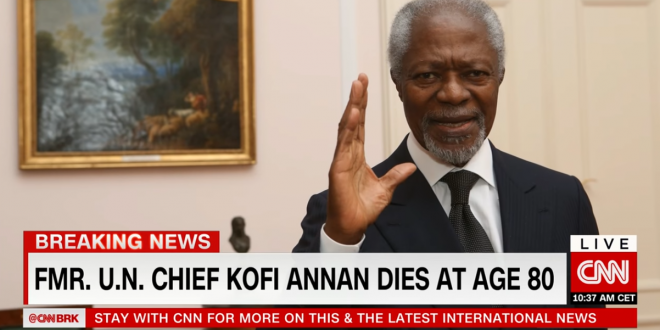 Former U.N. Secretary-General Kofi Annan has died aged 80 after a short illness, it was announced Saturday. The Ghanaian led the U.N. from 1997 to 2006 and was chair of the Elders, a group of former heads of state and human rights advocates set up by Nelson Mandela. As U.N. head, Annan was a staunch opponent of the Iraq War. He, along with the U.N. as a whole, was awarded the Nobel Peace Prize in 2001.

He was the first person of sub-Saharan African descent to take up the position at the top of global diplomacy. He served two terms as the seventh U.N. chief. The Ghanaian died following a short illness according to a statement by The Elders. He was born in 1938 and first entered the U.N. system in 1962 as an officer for the World Health Organization before working his way up to the headquarters in New York.

Sad to hear of the death of Kofi Annan. A great leader and reformer of the UN, he made a huge contribution to making the world he has left a better place than the one he was born into. My thoughts and condolences are with his family. pic.twitter.com/P0SWagShJM

We express our profound sorrow at the passing away of Nobel Laureate and former UNSG Mr. Kofi Annan. The world has lost not only a great African diplomat and humanitarian but also a conscience keeper of international peace and security.

“In these turbulent and trying times, he never stopped working to give life to the values of the United Nations Charter. His legacy will remain a true inspiration for all of us.”
— @AntonioGuterres on the passing of @KofiAnnan, 18 Aug 2018 pic.twitter.com/dLdnBOJFLF

The international community has lost an outstanding, remarkable and suave diplomat in Kofi Annan, a former United Nations Secretary General and Nobel Peace Laureate. We mourn a distinguished man and a friend of humanity.

Sad to hear the news of the death of Kofi Annan. As a former UN secretary-general and Nobel Peace Laureate, he dedicated his life to human rights and building bridges between nations. He will always be remembered as a great humanitarian and a tireless advocate for peace.

The world has lost a great man in Kofi Annan. I will miss him.