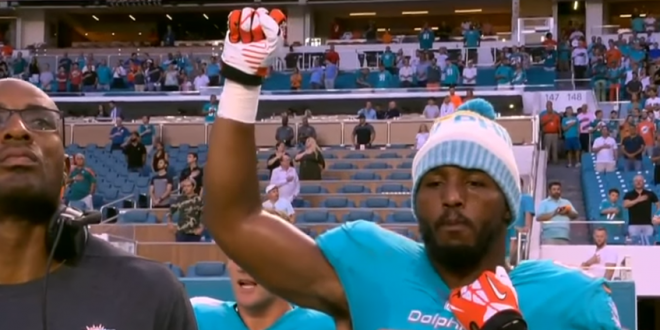 Player demonstrations took place during the national anthem at several early NFL preseason games Thursday night. In Miami, Kenny Stills and two other Dolphins players protested during the anthem before their 26-24 loss to the Tampa Bay Buccaneers.

Receivers Stills and Albert Wilson kneeled behind teammates lined up standing along the sideline. Defensive end Robert Quinn stood and raised his right fist, as he did during the anthem last season while with the Los Angeles Rams. There were no apparent demonstrations by the Buccaneers.

In other games Thursday, four Jaguars players were not on the field when the anthem was played before their home game against New Orleans, and team officials said it would be up to the players to explain why they weren’t on the field. Linebacker Telvin Smith, cornerback Jalen Ramsey, running back Leonard Fournette and running back T.J. Yeldon joined the rest of their teammates several moments later.