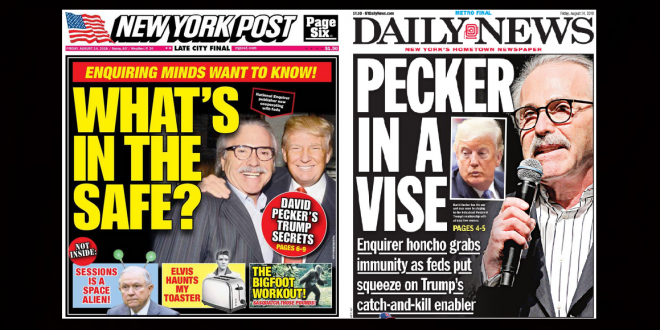 American Media CEO David Pecker is expected to go to market next month in a bid to raise about $425 million to refinance debt. The controversy surrounding his role in helping federal authorities win a guilty plea from Michael Cohen, President Trump’s former personal lawyer, can’t help the situation.

Credit Suisse is expected to be tapped as the banker to handle the refinancing bid, but financial players seem split on how the controversy will affect the fundraising efforts. “He’s toxic,” said one financial source, referring to Pecker. “There’s no other way to put it. Who would want to give him money?”

The Enquirer endorsed Trump for president in 2016, the first time it had ever officially backed a candidate. In the news pages, Trump’s coverage was so favorable that the New Yorker magazine said the Enquirer embraced him “with sycophantic fervor.”

Positive headlines for Trump, a Republican, were matched by negative stories about his opponents, including Hillary Clinton , a Democrat: An Enquirer front page from 2015 said “Hillary: 6 Months to Live” and accompanied the headline with a picture of an unsmiling Clinton with bags under her eyes.

Last night Rachel Maddow noted that Trump himself had a hand in selecting some of the National Enquirer’s anti-Hillary headlines.

Previous Cuomo And Conway Trade Barbs In Wild CNN Interview When Conway Won’t Admit Trump Is A Liar [VIDEO]
Next Chelsea Clinton Mocks Pecker’s Front Pages: I Missed Them All, Including The One About My Alien Sibling