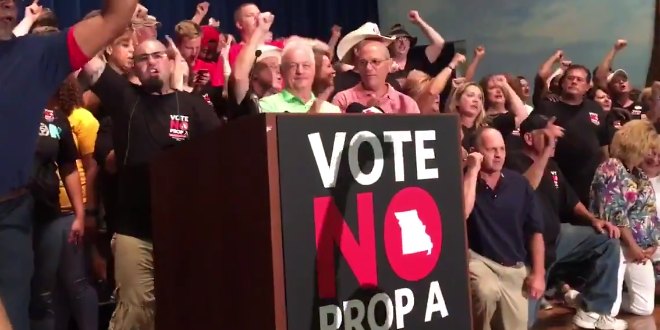 After a succession of political setbacks in onetime strongholds and a landmark defeat in the Supreme Court, organized labor has notched a hard-won victory as Missouri voters overrode a legislative move to curb union power.

A measure on the ballot on Tuesday asked voters to pass judgment on a prospective law barring private-sector unions from collecting mandatory fees from workers who choose not to become members. The law was rejected by a 2-to-1 margin.

The Supreme Court in June struck down such fees for public-sector employees, achieving a longstanding goal of conservative groups and overruling a four-decade precedent.

With over 64% of the vote in, Right to Work has been soundly defeated in Missouri. Today, Missourians have shown when they stick together they can accomplish anything. #1u #VoteNoOnPropA pic.twitter.com/VboJbIz5NN

I’m glad to hear Prop A was defeated tonight in Missouri. Right-to-work legislation must be defeated nationwide. We must stand together, beat back union busters, and continue to build and grow the trade union movement in this country.

BREAKING: #PropA has failed! Tonight is a victory for working Missourians across the state. Voters rightfully rejected this shameful attempt by Republicans and corporate interests to hurt working families and weaken unions. Make no mistake: When unions succeed, America succeeds!