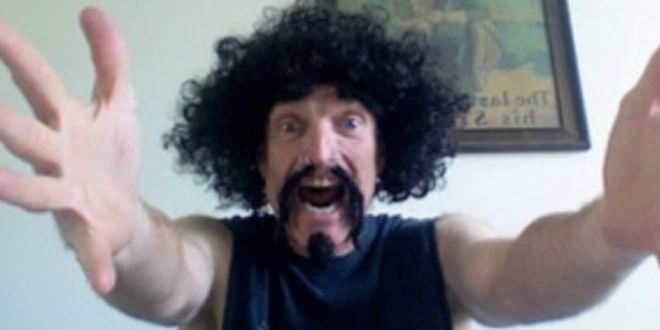 They’re really coming out of the woodwork lately:

On his Monday morning radio show, Steve West promotes fanatical conspiracies about “Jewish cabals” that are “harvesting baby parts” through Planned Parenthood, that torture and molest children and that run the Republican Party.

On Tuesday he won the Republican primary for a Clay County seat in the Missouri House by nearly 25 points. “Looking back in history, unfortunately, Hitler was right about what was taking place in Germany. And who was behind it,” West said on a show on KCXL radio on Jan. 23, 2017.

West won the 15th District nomination in a four-candidate race. Besides his radio show, he also has a YouTube channel and a website. Donning a wig and fake beard and calling himself Jack Justice, he has unleashed an array of bigotry including homophobia, anti-Semitism, Islamophobia and outright racism.

“I’m trying to get sense of why he flew under the radar, and I’m not sure I have a great answer,” said Karen Aroesty, regional director of the Anti-Defamation League. “What is a person who is elected into a position of power going to do with beliefs like this?”

Neither the Clay County Republican Party nor the state party responded to requests for comment. KCXL did not reply to a request for comment.

West, reached by phone Thursday afternoon, said he wanted to talk about “the issues” and his platform. He declined to speak about statements he is made that he said have been taken out of context. “You guys want to make it an issue, you can go there, but I’m not going to comment on that,” he said. He then asked if he could call back in a few minutes, and hung up.

The state Republican Party has issued a statement:

The @GOP is the party of White Nationalists. West just won #MO15 primary by 25 points!
“Jews control the media…the legal system…Jews who are involved in GOP politics are grooming America, just as a pedophile grooms his victim.”-Steve West #VoteBlue
https://t.co/NPd5Jw62n2