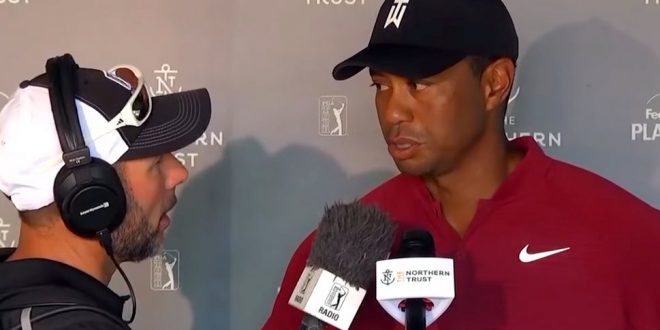 Tiger Woods did his best to stay clear of controversy Sunday when he was asked after the final round of the Northern Trust about his relationship with President Donald Trump. Woods has played golf with Trump, including after he was elected in 2016 and again last year at Thanksgiving with golfers Dustin Johnson and Brad Faxon.

“Well, he’s the president of the United States. You have to respect the office. No matter who is in the office, you may like, dislike personality or the politics, but we all must respect the office.” Asked if he had any more to say about the state and discourse of race relations, Woods said: “No. I just finished 72 holes and am really hungry.” The Fake News Media worked hard to get Tiger Woods to say something that he didn’t want to say. Tiger wouldn’t play the game – he is very smart. More importantly, he is playing great golf again!

Thank you to the great @JimBrownNFL32, perhaps the greatest running back of all time, for your wonderful words and support. Since our meeting in New York, African-American UNEMPLOYMENT has reached the LOWEST LEVEL IN HISTORY. You get it!

Previous NRA TV Host Flips Out Over GOP “Hell List”: It’s A Road Map To The Full Weaponization Of Government [VIDEO]
Next Randy Rainbow: If You Ever Got Impeached [VIDEO]