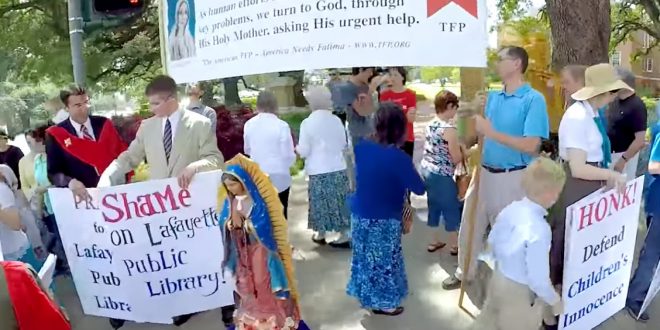 From the red-caped Catholic loons at Tradition, Family, and Property:

When “gender fluid” story books replace Little Red Riding Hood, we should ask ourselves: Has society sunk lower than Sodom and Gomorrah? Endorsed by the American Library Association, the “Drag Queen Story Hour” has spread to twenty-one states, targeting preschool and grade school children with homosexuality and transgenderism in public libraries.

The Associated Press filmed a “Drag Queen Story Hour” in New York. “Who wants to be a drag queen when they grown up?” asked the drag queen. “Meeee!!!” cried the room of little children. Coloring books used at these immoral programs teach toddlers how to “create your own drag name,” and “circle your pronouns.”

We must not remain silent as this new form of transgender child abuse spreads nationwide. Speak up now! Protect the little ones. Please sign your peaceful protest today. Get More Information Here & Sample Protest Letter to Send to Your Local Library / City Mayor.

“Whosoever shall scandalize one of these little ones that believe in me; it were better for him that a millstone were hanged around his neck, and he were cast into the sea” (Mark 9:41).

The clip posted yesterday was filmed in Lafayette, Louisiana.

Previous CALIFORNIA: Governor Gets Bill Allowing Some Cities To Decide If Bars Can Stay Open Until 4AM [VIDEO]
Next Franklin Graham Blames Rise In STD Cases On “Sexual Immorality,” Gave Trump Mulligans For Serial Adultery