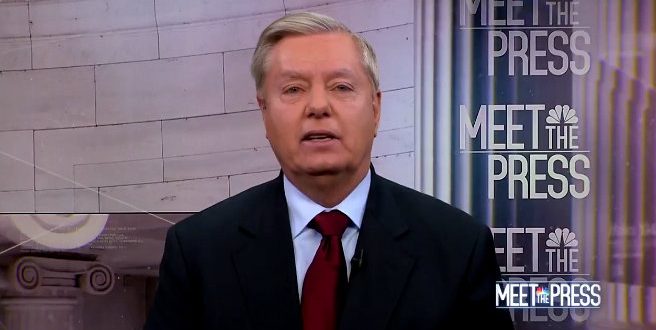 Lindsey Graham: If Trump Fires Sessions, Any Nominee Will Have To Promise To Let Mueller Finish [VIDEO]

Sen. Lindsey O. Graham (R-S.C.) said Tuesday that if President Trump replaces Attorney General Jeff Sessions, his new nominee would have to promise the Senate that he would allow special counsel Robert S. Mueller III to complete his investigation.

“You have to replace him with somebody who is highly qualified and will commit to the Senate to allow Mueller to do his job,” Graham said. “Nobody is going to take Jeff’s place that doesn’t commit to the Senate and the country as a whole that Mueller will be allowed to finish his job without political interference.”

“This relationship is beyond repair, I think,” Graham said Tuesday. Graham said the rift between Trump and Sessions is “much deeper” than their differences over the Mueller investigation but would not elaborate. “It’s a pretty deep breach,” Graham said.

bizarre — at the 6:00 mark of this, Lindsey Graham says Trump’s issue with AG Sessions is “much deeper than” just the Russia recusal.

“We won’t say on this show but it’s a pretty deep breach.”pic.twitter.com/gpHiVmcQC4

Curious thing Sen. Graham said on the Today Show a little while ago. Asked if Trump's only beef with Sessions is the Mueller investigation, Graham says "it's much deeper than that." Pressed, all he says is, "well, we won't say on this show but it's a pretty deep breach."

WATCH: Sen. Lindsey Graham goes from "there will be holy hell to pay" if Jeff Sessions is fired to "there will be some serious discussions about a new Attorney General" pic.twitter.com/WmlSKYfeoD

Previous Robert Jeffress: Evangelicals Don’t Care About Trump’s Adultery, The Left’s Shaming Is Not Going To Work
Next Junior’s Mistress: We Make The Perfect Team