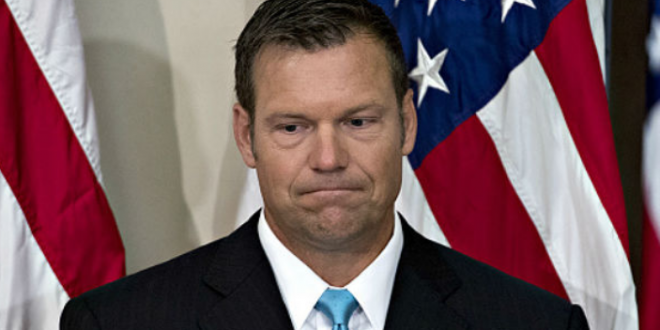 KANSAS: Secretary Of State Kris Kobach Continues To Refuse To Recuse Himself From Recount Of Own Votes

Kansas Secretary of State Kris Kobach said Thursday that he has no plans to recuse himself from a recount process in the race for governor because any counting of ballots would take place at the county level.

“The recount thing is done on a county level, so the secretary of state does not actually participate directly in the recount,” Kobach said after initial results showed him winning by fewer than 200 votes.

“The secretary of state’s office merely serves as a coordinating entity overseeing it all but not actually counting the votes,” Kobach said, contending that his role puts him at arm’s length from the actual recount.

Mark Johnson, a Kansas City attorney with experience in election law, said Kobach’s role in setting the cost is the primary reason why he should recuse himself. He said Kobach should cede this authority to a deputy.

“Secretary Kobach should not decide that. That is a conflict, in my opinion. To that extent, the secretary is directly involved in the recount process.  He could set the bond so high that no one could afford that,” said Johnson, who was a member of the team that defeated Kobach in federal court earlier this year in a case that overturned a Kansas voting restriction.

Kris Kobach is leading Kansas Gov. Jeff Colyer by fewer than 200 votes in the race. As current Secretary of State, Kobach’s office oversees state elections — but he says he would not recuse himself in a recount. https://t.co/gcYB1jTV0h pic.twitter.com/XB0ZAeO14o

Thousands of votes cast but still uncounted could change result of Kobach-Colyer racehttps://t.co/bAFPmfTQ27

Kris Kobach and Gov. Jeff Colyer say they're moving forward with their general election campaigns, even though primary results may not be known for weeks: https://t.co/YaU0CRk1Sd pic.twitter.com/fPRPAKPrQ4