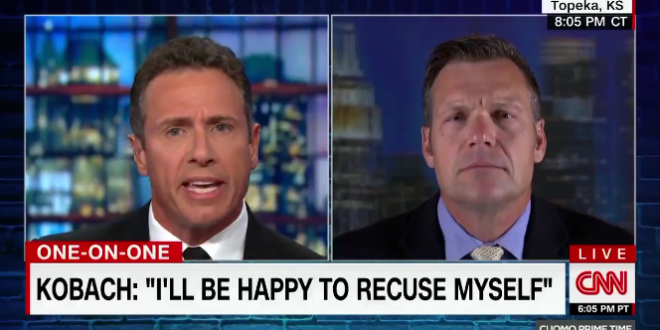 Kansas Secretary of State Kris Kobach said in a cable news interview Thursday night that he plans to recuse himself from the vote tally process in the face of pressure from Gov. Jeff Colyer and mounting confusion over vote totals.

Kobach said that he would recuse himself in an interview with CNN hours after Colyer had sent a letter demanding that Kobach refrain from instructing county election officials on the counting of ballots in the primary race for governor on a day when the vote total narrowed to roughly 100 votes as multiple counties reported that vote totals were incorrect.

“I’ll be happy to recuse myself. But as I say, it really doesn’t make any difference. My office doesn’t count the votes. The counties do,” Kobach said in an interview with host Chris Cuomo.

Kansas Secretary of State Kris Kobach: “I’ll be happy to recuse myself” from the recount in the GOP primary race for the Kansas governor’s office, a contest in which he maintains a razor thin lead https://t.co/yegB1ZJSjE pic.twitter.com/rwP9QxP8Nj