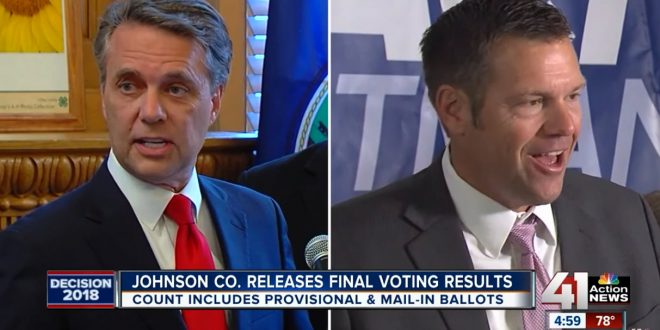 Kansas Secretary of State Kris Kobach has captured the Republican nomination for governor after the tightest primary fight in Kansas history, edging out the state’s sitting governor. Gov. Jeff Colyer, a plastic surgeon from Overland Park, announced his concession Tuesday night after he failed to narrow the gap with Kobach when provisional ballots in Johnson County were tallied.

“I just had a conversation with the Secretary of State and I congratulated him on his success and repeated my determination to keep this seat in Republican hands,” Colyer said. “This election is probably the closest in America, but the numbers just aren’t there unless we go to extraordinary measures.”

Kobach pointed to a tweet from President Donald Trump endorsing him the day before the election as playing a key role in helping him power past Colyer. “I think it was absolutely crucial,” Kobach said. “There’s no question that the election day voting went much more strongly for me as compared to the advance voting.”