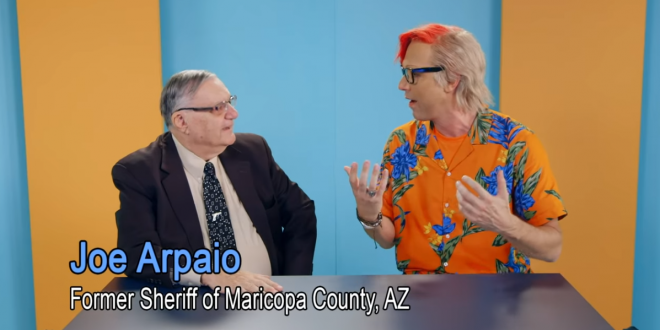 Playing a Finnish “unboxing” celebrity named OMGWhizzBoyOMG with a shock of bright orange hair, Sacha Baron Cohen sat down with the former sheriff and first asked him to explain “what communists are doing to stop people having guns.”

“I have 43 guns,” Baron Cohen told his guest. “I’ve been collecting them for the upcoming race war.” Arpaio didn’t blink.

From there, Baron Cohen started asking Arpaio about his first “hand job,” adding, “If Donald Trump calls you up after this and says, ‘Sheriff Joe, I want to offer you an amazing blow job,’ would you say yes?” “I may have to say yes,” he replied calmly.