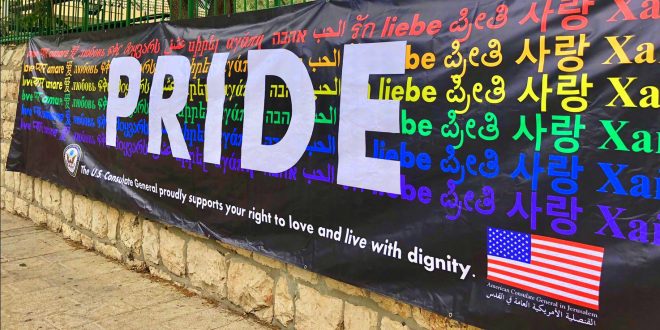 Two far-right groups held demonstrations in Jerusalem on Thursday, protesting against the city’s annual Pride Parade march and calling to protect ‘the normal family.’ Under the watchful eye of police officers deployed to keep the marchers and protesters apart, the extremist nationalist Lehava organization protested the march near its starting point in Liberty Bell Park.

Activists with the group held up signs with slogans stating that “Jerusalem is a holy city,” and comparing the marchers to the Biblical Sodom. A heavy police presence kept them away from the marchers, three years after a deadly knife attack by an ultra-Orthodox zealot that killed 16-year-old marcher Shira Banki.

The activists, who numbered a few dozen, scuffled briefly with police and said some of the group’s members were on an alleged police “blacklist” and were prevented from approaching the march.  They also claimed that police officers “disguised as gays” infiltrated their protest and detained a number of their members. Far-right activist Itamar Ben-Gvir vowed to sue the police for “silencing” the counter-protest.

Also from the Times of Israel:

“Since the Holocaust, many Jews say ‘Never again.’ To never allow the violence and hatred of the Holocaust to repeat itself,” Moshe Hasdai wrote. “In order to ensure this, we are obligated to strike our enemies who incite and murder us.”

“We have are required to eliminate and expel from among us those people who are willing to erase and deny our history, to us as Jews and Judaism. This is Amalek, whose verdict is known, and the time has come to carry out.” In biblical Jewish tradition, the nomadic Amalekite tribe came to be viewed as the essence of evil, with the Bible commanding: “Do not spare them; put to death men and women, children and infants, cattle and sheep, camels and donkeys.”

Activists in the far-right Lehava group claim that police officers “disguised as gays” infiltrated their protest and detained a number of their members. In the meantime, #JerusalemPride marchers shout the chant their opponents likely hate most. “WE’RE EVERYWHERE!” pic.twitter.com/aDYLzxStBj

No surprise that the homophobes demonstrating against today’s Gay Pride Parade in Jerusalem are being led by Rabbi Ariel Bareli. After he led a campaign to chase African refugees out of Sderot, the government brought him to Tel Aviv to do more of the same https://t.co/Ei9qeVUKvi pic.twitter.com/Yw7ZrCapGw

Benzi Gopstein, the leader of the racist anti-miscegenation group Lehava is literally the Israeli version of Scar.

Thousands march in largest-ever Jerusalem Pride Parade under heavy security: Following massive protests over gay parental surrogacy rights, tens of thousands gather in the capital, with many saying they were marching ‘for those who still… https://t.co/S0JFi05hsH TimesofIsrael pic.twitter.com/MwUMHjpzHM

As Secretary Pompeo said to commemorate Pride month in June, the “United States reaffirms its commitment to protecting and defending the human rights of all, including LGBTI persons.” Have a safe and happy #Pride, Jerusalem! 🇺🇸🏳️‍🌈 pic.twitter.com/v9E6Sm0S2j