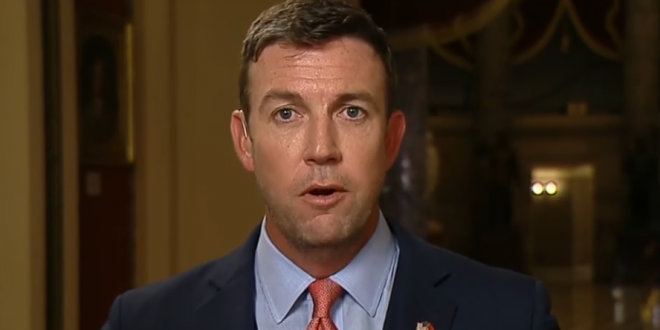 Yesterday GOP Rep. Duncan Hunter and his wife were indicted for stealing over $250,000 from Hunter’s campaign donations. The details from the charging documents are out and well, read for yourself:

Throughout the relevant period, the Hunters spent substantially more than they earned. They overdrew their bank account more than 1,100 times in a seven-year period resulting in approximately $37,761 in ‘overdraft’ and ‘insufficient funds bank’ fees.

The Hunters concealed and disguised the personal nature of many of their campaign expenditures by either falsely stating the expenses were ‘campaign related’ or by falsely reporting the item or service purchased when providing information to the Treasurer (by, for example, buying personal clothing items at a golf course so that the purchase could be falsely reported to the Treasurer as ‘balls for the wounded warriors’).

The Hunters concealed and disguised the personal nature of their family’s purchases of video games using Campaign funds by falsely claiming to a financial institution that the payments were fraudulent charges and then reporting the purchases to the FEC and the public as fraudulent charges.

On or about January 25, 2010, in Incline Village, Nevada, Duncan Hunter spent $1,008.72 in campaign funds at the Hyatt Regency Lake Tahoe Resort, Spa and Casino for food, drinks, and three nights lodging during a personal ski trip with Individual 14. On this day, the Hunter family bank account had a negative balance and incurred six separate insufficient funds fees (totaling $198). Also on this same day, Duncan Hunter withdrew $20 from his personal bank account, leaving a balance of $15.02.

On or about May 19, 2010, in Santee, California, Margaret Hunter spent $307.72 in campaign funds at Target to purchase a tablecloth, three square pillows, a three-piece brush set, a metal tray, four temporary shades, four window panels, a white duck, two Punky Brewster items, a ring pop, and two five-packs of ‘animals.’ In order to conceal and disguise this illegal charge, Hunter falsely told the Treasurer that it was for ‘teacher/parent supporter events.

On or about October 22, 2014, in San Diego, California, Duncan Hunter spent $204.34 in campaign funds for two greens fees, food, and drinks at the Rancho Bernardo Golf Resort, during a personal golf outing with friends, including Individual 1A. To conceal and disguise his illegal activity, he misled his Chief of Staff by describing his regular golf outing with Individual 1A as ‘a Christian thing’ with a supporter.

And that is only about HALF of the entries on the charging document. Hit the link for the rest. (Tipped by JMG reader Homer)

Previous Trump: 80% Of The Press Is The Enemy Of The People
Next VIRGINIA: Ku Klux Klan Leader Sentenced To Four Years For Firing Gun Into Crowd At 2017 Nazi Rally