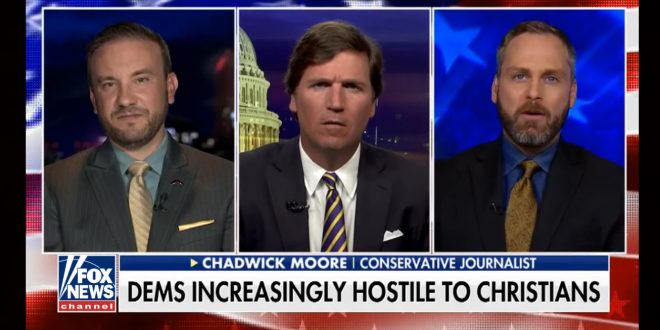 Last month homocon Chadwick Moore was supposedly banned by Grindr for posting an anti-trans message in his profile, sending Moore to Twitter where he whined to the FBI, who are surely interested in helping him get dick. Last night Moore took his butthurt to Fox News to attack Vermont gubernatorial nominee Christine Hallquist.

CHADWICK MOORE: You’re absolutely right to acknowledge Hallquist’s transgender privilege. She can get away with many, many things by being transgender, who knows if that’s even how she won this primary. But while the entire country is fixated on the fact that she’s transgender, nobody knows anything about her policies. In fact, all we know —  that she’s for Medicaid for all, she’s a climate alarmist, she believes in $15 minimum wage and that’s kind of it.

All we know is it’s someone who’s transgender and let’s just celebrate that? Can they lead the entire state of Vermont?  I don’t understand this sort of left wing LGBT obsession with Christians. I imagine a lot of it, Hallquist talks about growing up in a Catholic school and because he was an effeminate little boy, in his words, getting a bunch of garbage from the nuns and the priests.

.@Grindr we’d love to see your internal company guidelines on postmodernism, gender theory, and banned words. Are you a gay dating app, or another tech firm engaged in thought-policing at the behest of radical, unfuckable, far-left activists?

I mean, god-forbid someone challenge post-modernist fake-science on a dating app, the same dating app that is a notorious conduit of prostitution, illegal drug use, illegal drug sales, and the spread of disease. I dunno does the @fbi need to look into what happens on @grindr?