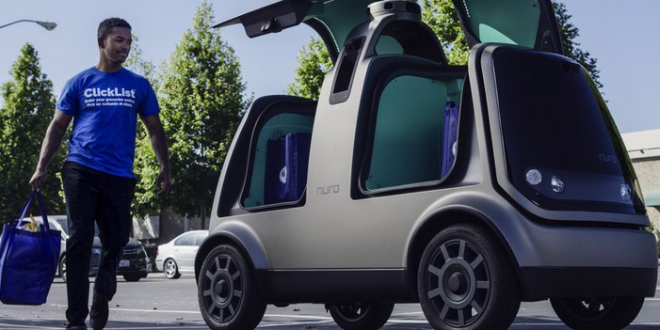 At a time when big-box retailers are trying to offer the same conveniences as their online competitors, the biggest U.S. grocery chain is testing the use of driverless cars to deliver groceries in a Phoenix suburb. Kroger’s pilot program launched Thursday morning with a robotic vehicle parked outside one of its own Fry’s supermarkets in Scottsdale. A store clerk loaded the back seat with full grocery bags. A man was in the driver’s seat and another was in the front passenger seat with a laptop. Both were there to monitor the car’s performance.

Under the self-driving service, shoppers can order same-day or next-day delivery online or on a mobile app for a flat rate of about $6. After the order is placed, a driverless vehicle will deliver the groceries curbside, requiring customers to be present to fetch them. The vehicles will probably be opened with a numeric code. Currently, Kroger is operating with Toyota Prius vehicles. During the next phase of testing in the fall, deliveries will be made by a completely autonomous vehicle with no human aboard.